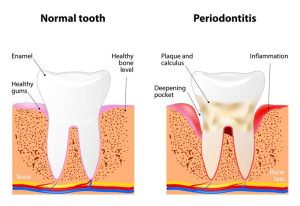 Periodontal disease, or gum disease, is the number one driver behind tooth loss, yet it’s also one of the most preventable and reversible dental conditions — with the right care. Dr. Andrew Geller and his team at Geller Family Dental specialize in treating gum disease in their patients in Bronxville, New York, and work with you to stop gum disease in its tracks. To learn more about preventing and treating periodontal disease, call or book an appointment online.

What is periodontal disease?

Periodontal, or gum, disease is very common — approximately 80% of Americans have some form of the disease, which ranges from mild to severe. Gum disease is caused by bacteria in your mouth that forms plaque, all of which is natural enough. The problem arises, however, when the plaque isn’t properly removed and builds up, becoming tartar, which is resistant to regular cleaning. This tartar invades your gums, causing them to separate from your teeth, exposing your gums and teeth to decay and further bacteria buildup.

In its earliest stages, periodontal disease first presents as gingivitis, when plaque and tartar buildup causes inflammation in your gums.

During this stage, your gums start to separate from your teeth, which creates pockets where more bacteria is able to get in. At this point, the disease affects the connective bones and tissues that hold your teeth in place.

This final stage is when the disease irreparably damages the connective structures that hold your teeth in place, allowing your teeth to loosen. If the damage is too advanced, Dr. Geller may have to remove severely compromised teeth.

What are the symptoms of periodontal disease?

The most common symptoms of gum disease are:

The severity of these symptoms is a good indication of how far your gum disease has advanced.

How is periodontal disease treated?

Depending on the stage of your gum disease, Dr. Geller turns to several treatments for periodontal disease, including:

In its early stages, aggressive cleaning, both at home and at Geller Family Dental, goes a long way toward treating gum disease.

Dr. Geller scrapes away the tartar buildup and smoothes the surfaces of your teeth under your gumline to prevent future buildup.

Dr. Geller folds back your gums and surgically removes bacteria and planes your teeth. After this process, he pulls your gums back over your teeth.

In severe cases, Dr. Geller uses bone or gum grafts from other areas in your mouth to repair your damaged gums and teeth.

If you suspect you may have periodontal disease, early intervention is key. Call Geller Family Dental or book an appointment online to get started on a treatment.

At Geller Family Dental, we accept most major insurance plans.

We'd love to hear from you! Please send us a message using the form below, request an appointment using our convenient appointment request form or call us today at (914) 776-1122.

Accessibility by WAH
Call Us Text Us